This is the last Blogger post for this blog. No, I've not decided to quit blogging, but I am moving this blog to 120 Blocks. If you follow in an RSS feeder or by email or through Google Friend Connect, please go to that link and subscribe to that blog. I have moved all the old posts over there, so you won't be missing anything if you want to go back and check something.

This blog will stay as it is, since the two Blogger's Quilt Festival posts are linked here. I guess I could change the links, but I haven't gotten that far yet.

Thank you for your patience!

No, I haven't gone all new age. Honestly. I haven't. I just have some questions for any of you who have used Swarovsky hotfix crystals in any projects.

This summer at the AQS show, I purchased a crystal kit. The woman from whom I purchased it said the crystals would stay on even through washing. She added that the jacket she was wearing was 8 years old and none of the crystals had come off yet. At the time, the only project I was considering using them on wouldn't have gotten constant use and laundering, but now...

I'm considering adding some crystals to a Christmas gift. It is something that might get washed somewhat regularly, but not as regularly as an article of clothing. So...

Do any of you have any experience with this? Do they really stay on pretty well? Any suggestions to make my experience more successful?

Thanks.
Posted by Gretchen at 9:00 AM

I had some Bed, Bath, and Beyond coupons and I wanted to pick up a tote to sit on my cutting table and collect scraps, since I don't seem to be very motivated to cut up my scraps and get them into my other totes. I was going to buy only one until I saw this! 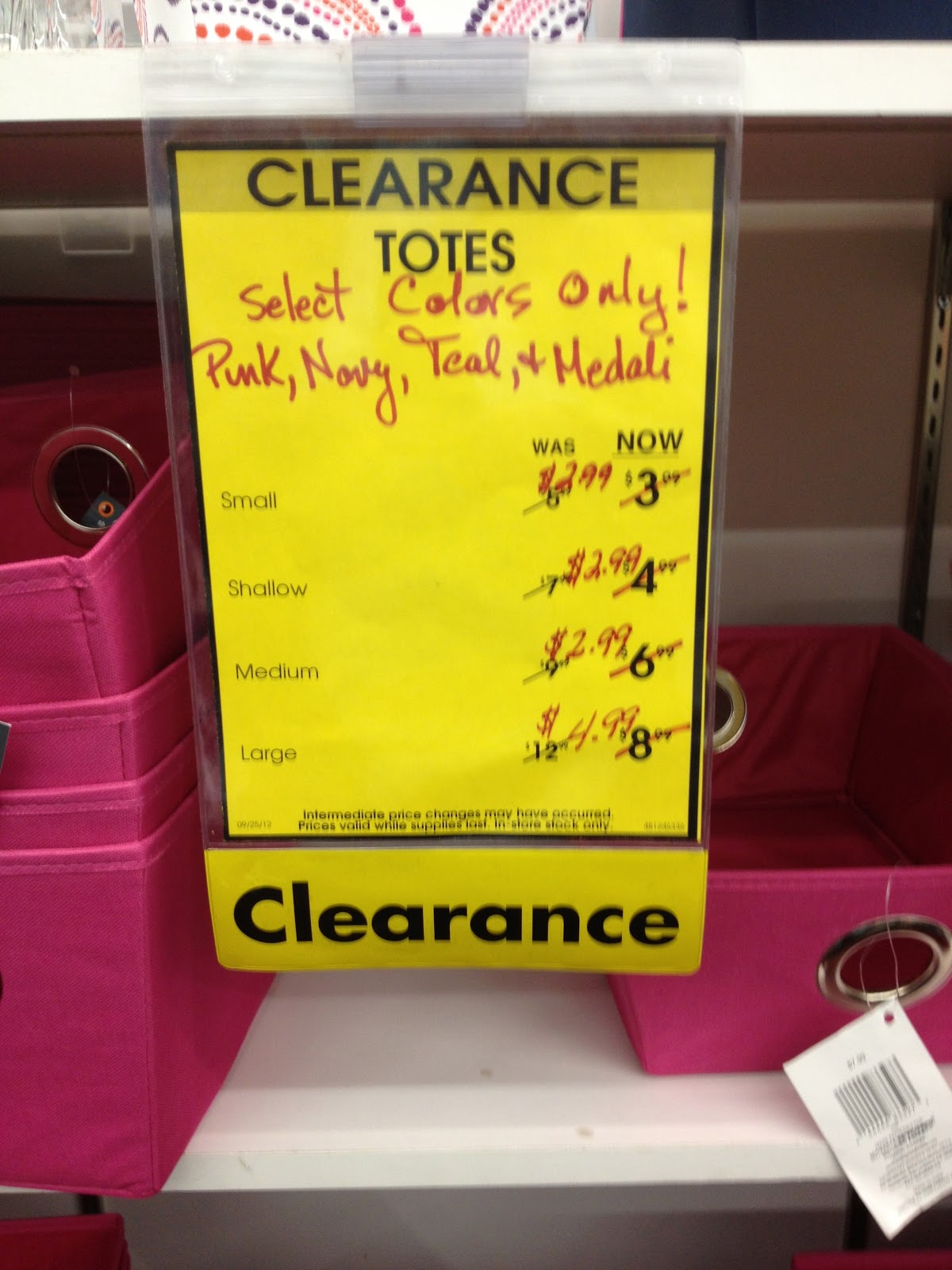 The largest of these are too large for my cube, but that wasn't what I needed these for anyway. I figured at $4.99 each I ought to pick up a couple extra, since I could always use them somewhere! So I grabbed a navy, a teal and a pink. When I got to the cash register, the navy and teal rang at $2.99 each. I pointed it out to the clerk, and he said if that is what the cash register rang them in as, that is what he needed to charge. So....I was really excited, needless to say!

In case you're concerned about me wasting my coupons, they went on 2 boxes of K cups and the cutest tea kettle I've ever seen.

Over the last week or so, fabric keeps arriving at my home! Look! 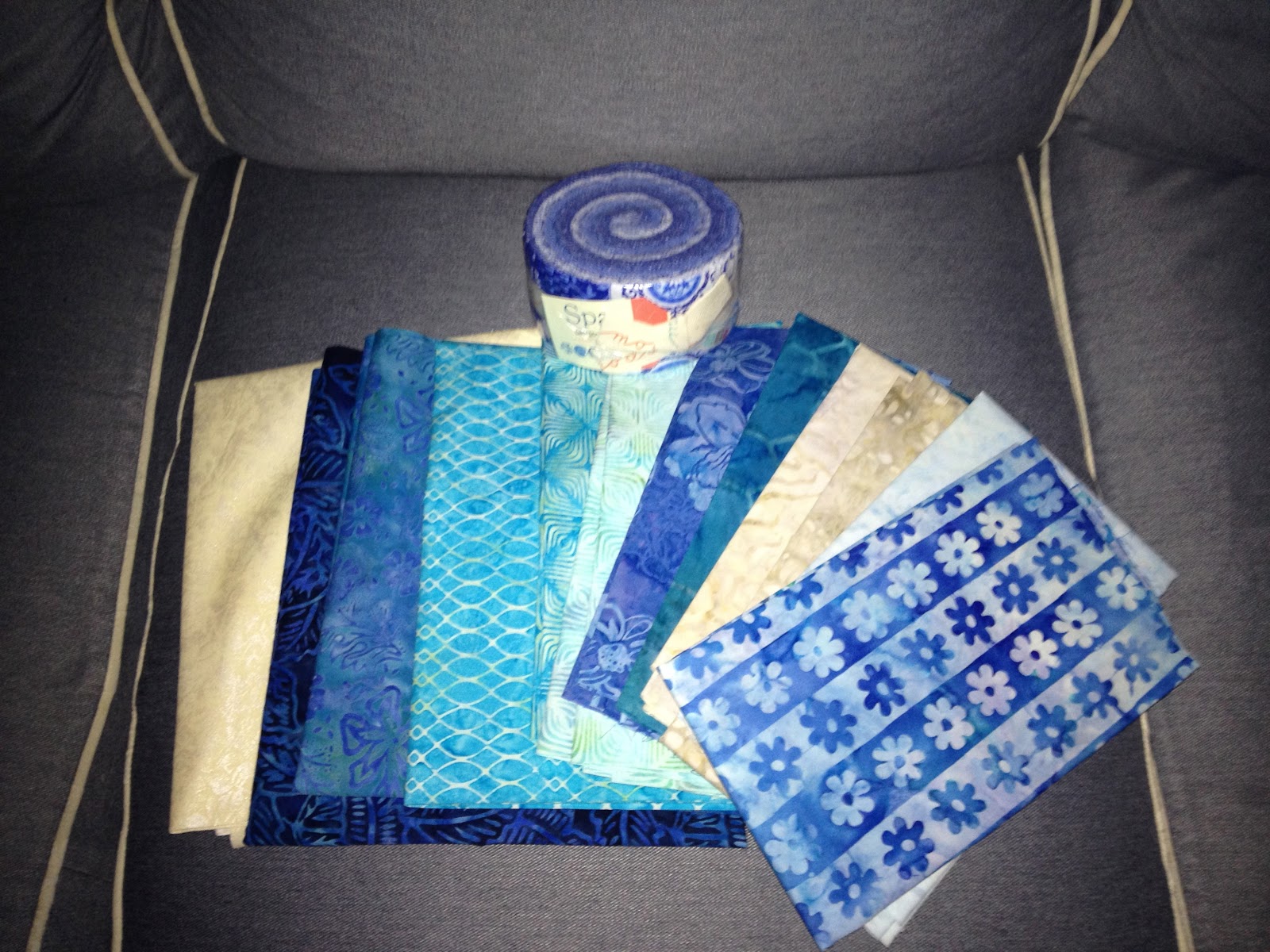 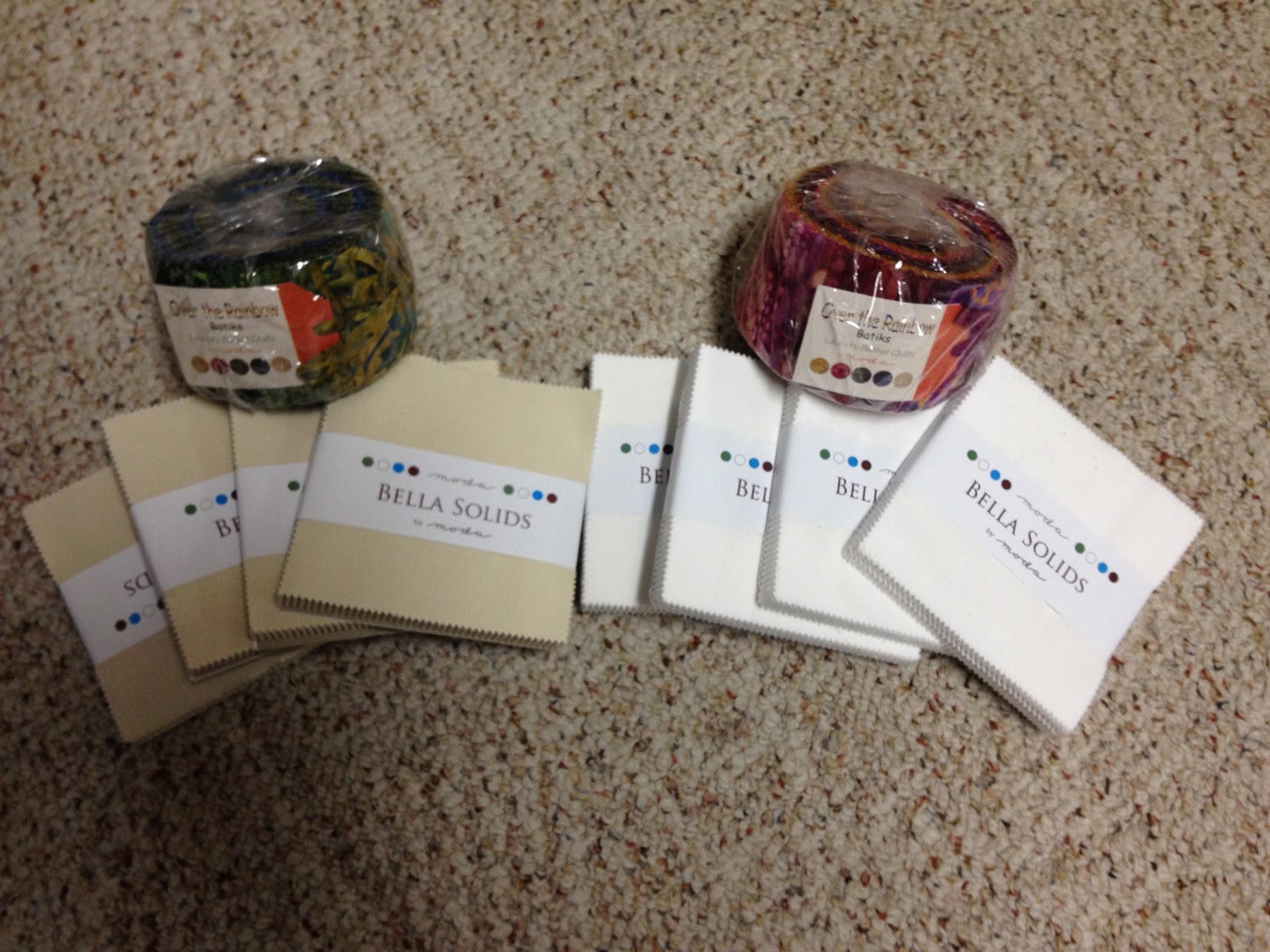 What is the excuse for all this? I keep having ideas. Not a good excuse and I must stop, but...

In the first picture, the blue batiks are all there because they were on sale and I collect them. Some day soon I will use them. (Seriously, how can you ever have too many blue batiks?) The cream Fairy Frost is there because it was on sale and, as anyone who reads this blog knows, Fairy Frost is my favorite neutral. The neutral batiks are there because they were on sale and neutral batiks are often hard to find. The Spa jelly roll was an impulse buy. (True confession: They were all impulse buys caused by a sale.) I am thinking of experimenting with using Jelly Roll Race quilt tops as fabric to cut up into pieces for other projects, thanks to Jaye's Renewed Jelly Roll Race quilt. If I'm to be really truthful though, I think a Spa Jelly Roll Race quilt will actually grace my living room couch once it is done.

In the second picture are some charm packs (not technically on sale but purchased on eBay so the price was much less than one might expect) because I am planning to try some small Scnibbles patterns soon (AKA after the Christmas rush). The two colorways of Rainbow jelly rolls probably won't make Jelly Roll Race quilts, but I'm pretty sure they will look gorgeous in paper pieced Mariner's compass quilts.

Before I start this, let me remind you to go check out The Blogger's Quilt Festival if you haven't already. As I write this, there are 432 quilts submitted and it is not too late to enter yours! Go for it.

I made a little progress on a couple of projects over the weekend. First, I did some hand quilting in the border of my 2009 Designer Mystery BOM. I'm almost to one end. Crosshatching is nice, straight quilting, but when the lines are only 1/2" apart and your quilt is 78" wide, it takes a while.

During the Saturday night sports debacle I finished hand piecing block 2 of the 2011 Designer Mystery BOM. I'm proud of how it turned out. 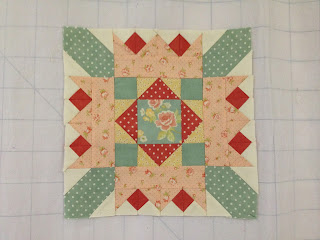 I also added two more rows to the Rail Fence Checkerboard, bringing the total so far to 6 rows. There will be a total of 13 rows when it is done. I'm really enjoying its looks. 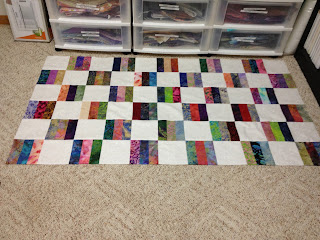 I also cut some more of the strip sets into 6 1/2" blocks. I hadn't completed that originally because I was concerned I wouldn't get enough sets if I changed my mind and wanted to make a nine patch. The next two rows are on the design wall. I'll get the rest up by the end of tomorrow, I hope.

That's it for today! Except to say Happy Birthday to my lovely eldest daughter! Happy birthday, Janni!

Yes, I guess I am going to do this yet again. I think the Blogger's Quilt Festival is fun. Amy had a great idea when she thought of this!

This time I'll feature the quilt that it took me the longest to make (at least, the one that is finished).

Back in 2008, my eldest was planning to be married so, of course, I wanted to make her a wedding quilt. She chose a pattern and colors ("Woven Stars" from the book Amazingly Simple Star Quilts - and yes, that is an Amazon affiliate link in case you want to pick up a copy), I bought fabric and started assembling the quilt top which I would then hand quilt. It was the first quilt I made with sashing and set on point. Both of those would look better if I did it now, but here's an example of how my lack of skill with both affected the corners of the sashing: 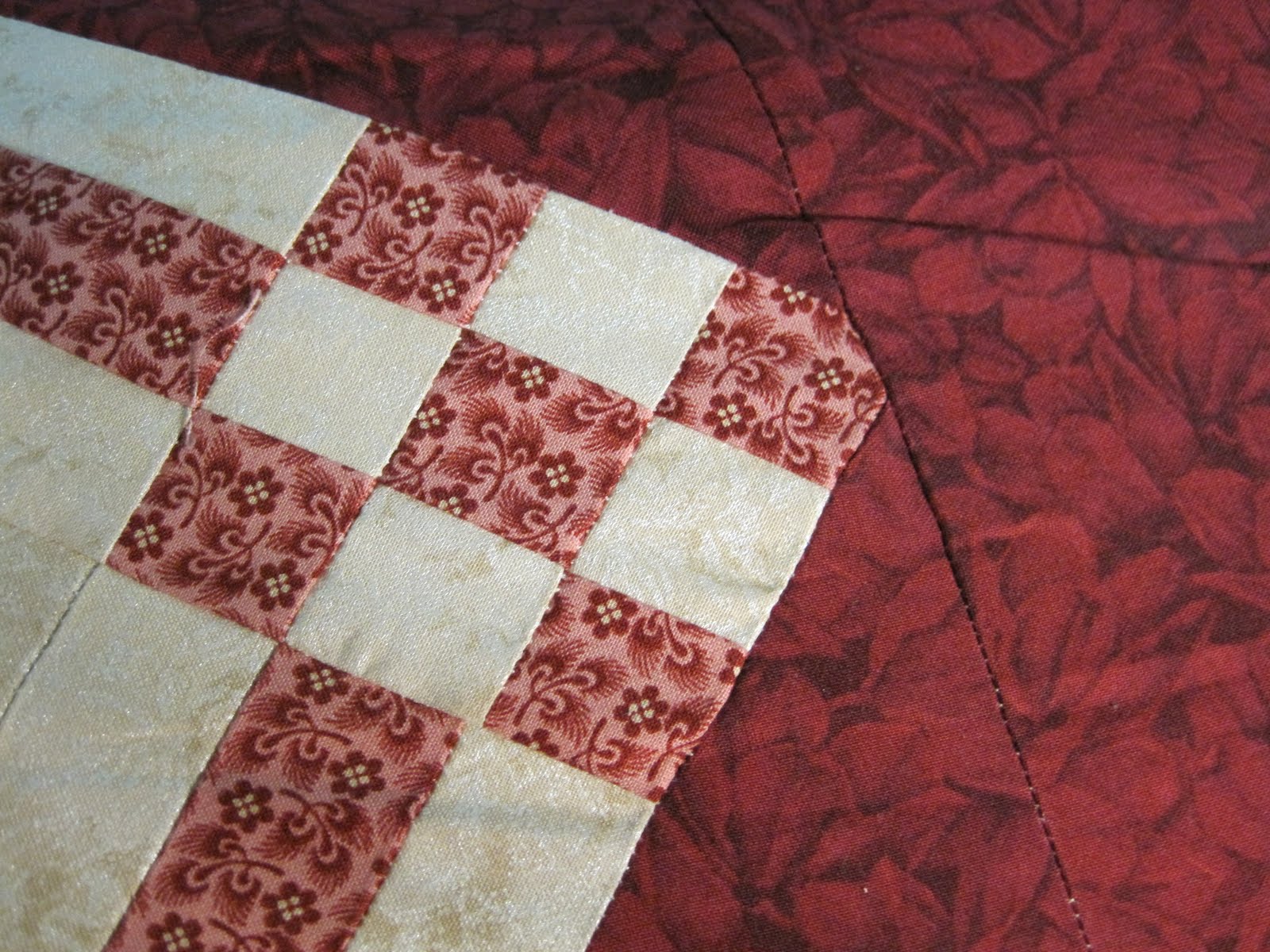 Next I assembled my new hand quilting frame (which meant I didn't have to baste it) and marked the quilt. I chose a motif for the borders that would have been better in a block area and which took me almost 8 hours each to do at the beginning. (Practice brought it down to 3-4 hours by the last border of the quilt.) 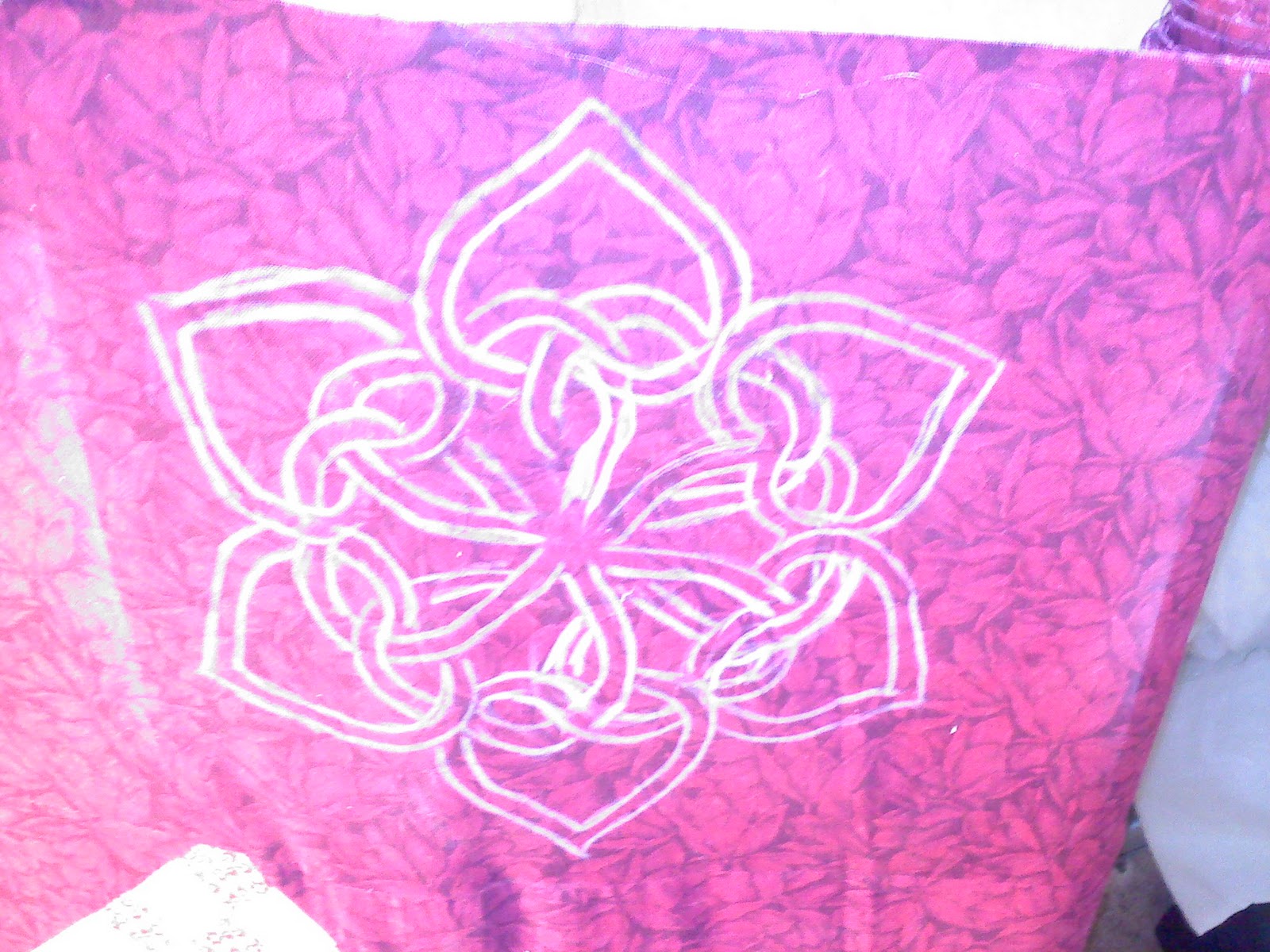 I started quilting in the first border and realized that this was going to take me forever. Maybe it would be a first anniversary gift. Then the wedding was postponed. A few months later the engagement was off. And I took a year off from quilting. No hurry. My daughter still wanted the quilt, but there were church quilts to get finished. I'd work on it a little, but with no sense of urgency not much progress happened.

Then in the fall of 2011 my niece got engaged, and I wanted to make her a quilt. I knew I needed to finish my daughter's quilt before I gave my niece one. Not that I was going to attempt to hand quilt my niece's quilt, but it just didn't seem fair to me. So I spent last January through March really putting in the effort on my daughter's quilt. 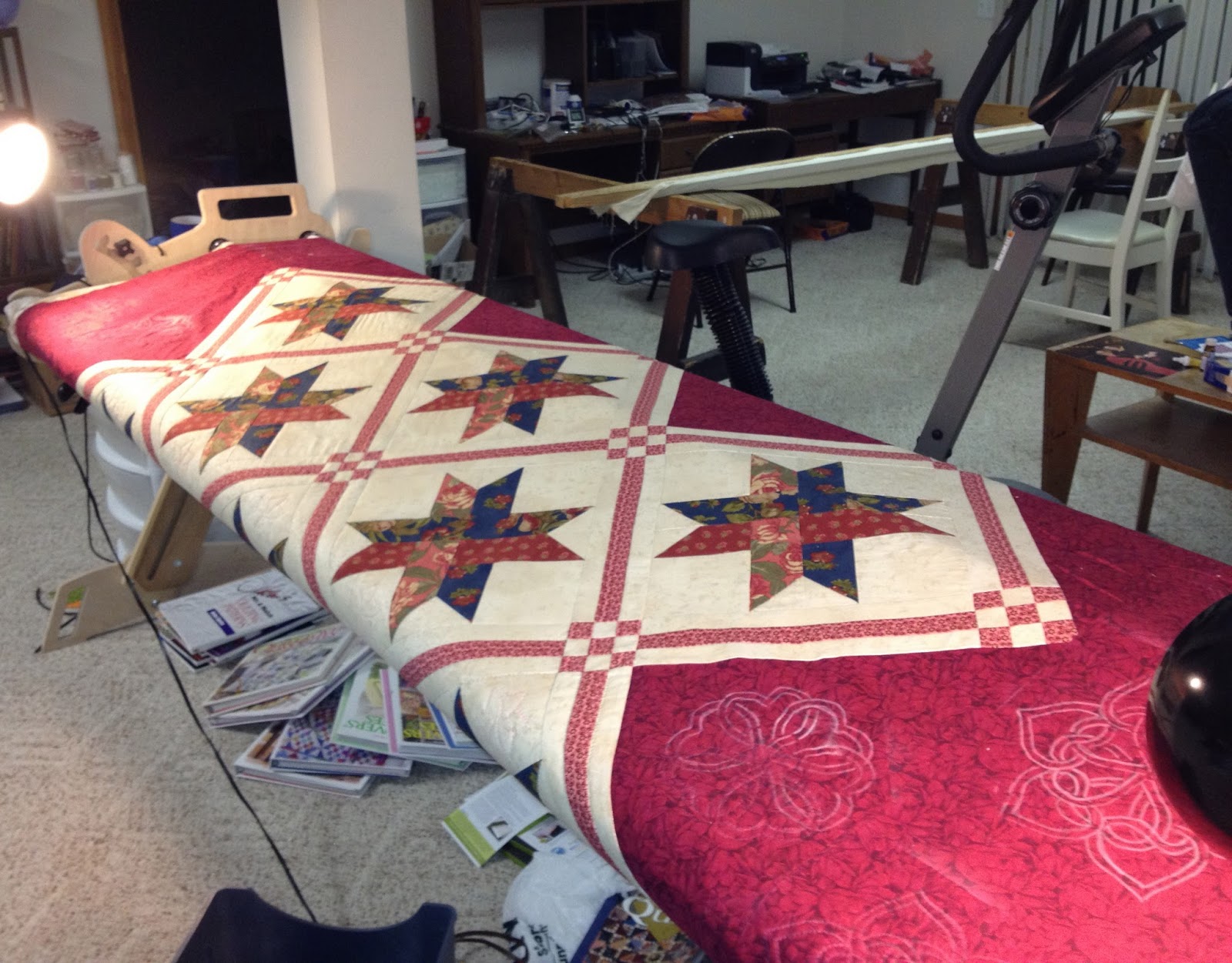 I finished it in late March. I had spent months spending several hours a day either hand quilting this quilt or machine piecing my niece's quilt (when my fingers wore out).

Here's the quilt laid out on my bed. It's current name is Janni's Woven Star, although my daughter still calls it her wedding quilt. 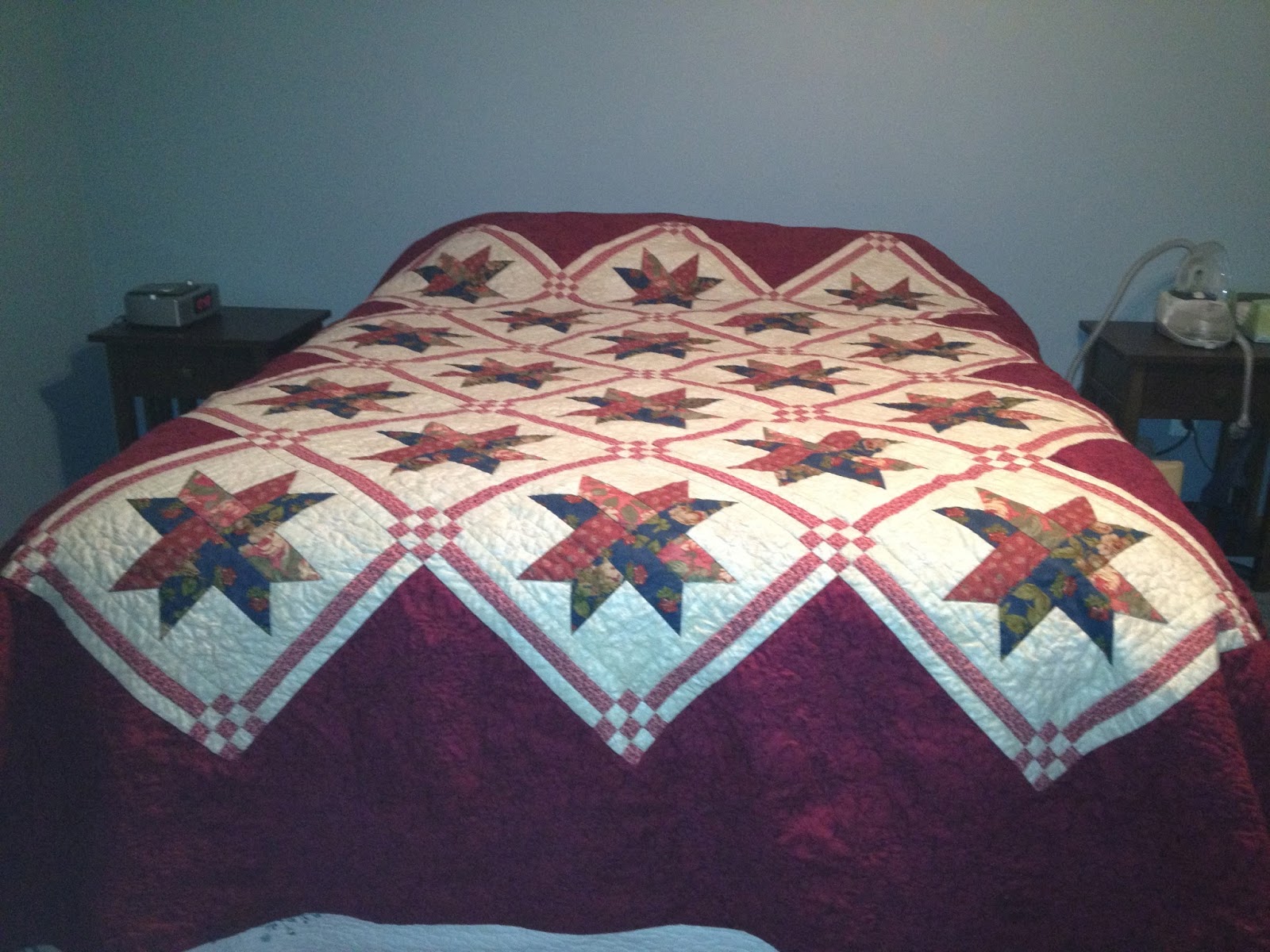 Here it is over my railing. 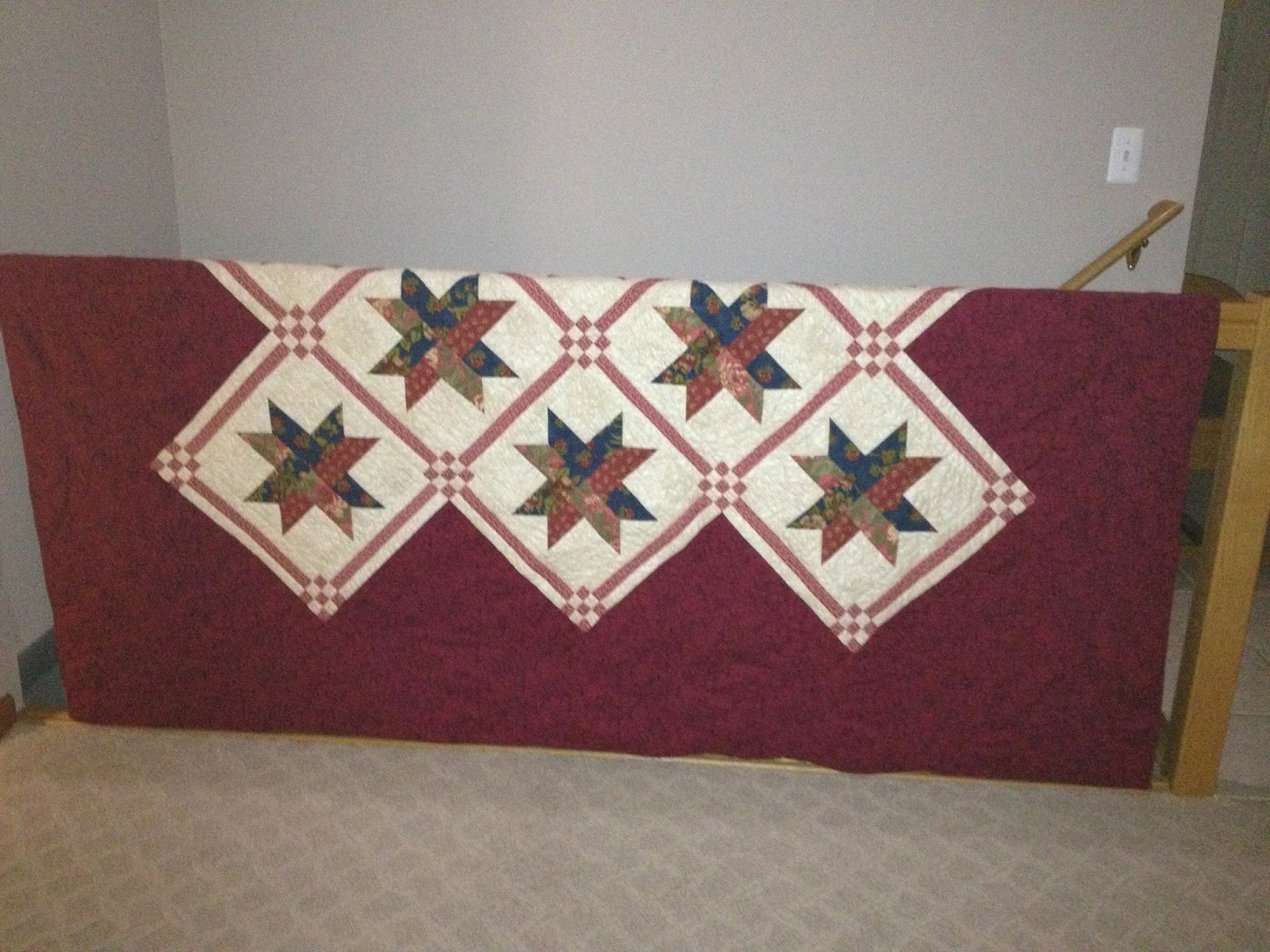 And here it is on her bed. 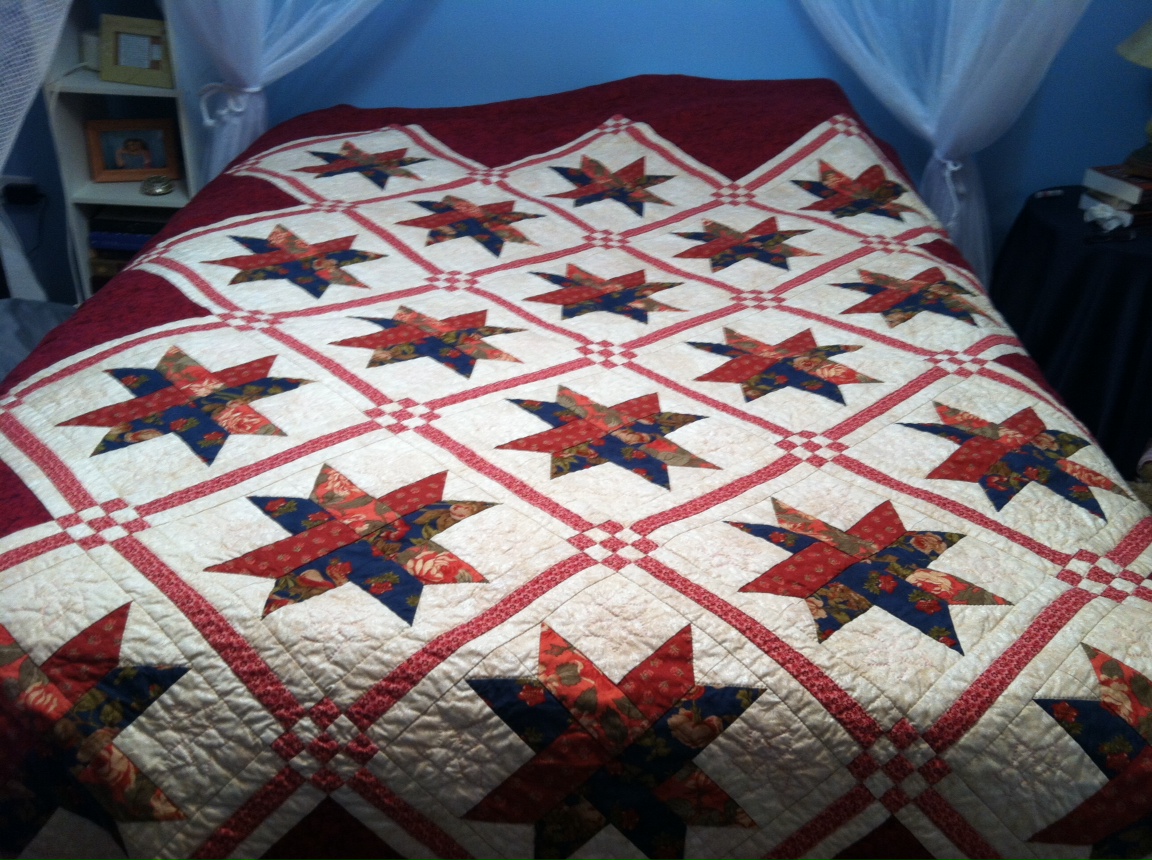 As I got near the end of the quilting, the number of things that I saw that I know would be better if I pieced it now really bugged me. She seems to be very happy with it, however, and that is what matters most.

The picture below is the first Log Cabin block that I ever made. I made it sometime in the mid 90s. There was a home party company called The Creative Circle which sold through hostessed parties where crafts were taught. Each party focused on one craft, but other craft kits were also available. My friends and I loved them. I still have several kits in my basement.

I think I picked up this kit at the needlework party. (We also had parties in candlewicking, macramé, counted cross stitch, and embroidery.) What I liked about the needlework kits was that they didn't just use one needleworks stitch.

When I chose this kit, I don't think I even knew that it was based on a quilt block. It would be at least 10 years before I would become a quilter. Still, this is my first Log Cabin block. 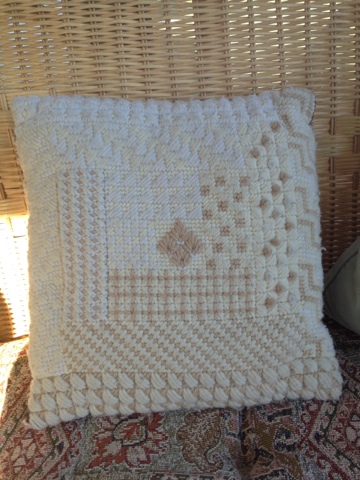 Gretchen
I am a retired public school teacher who has recently discovered quilting!

Books I Enjoy or Use